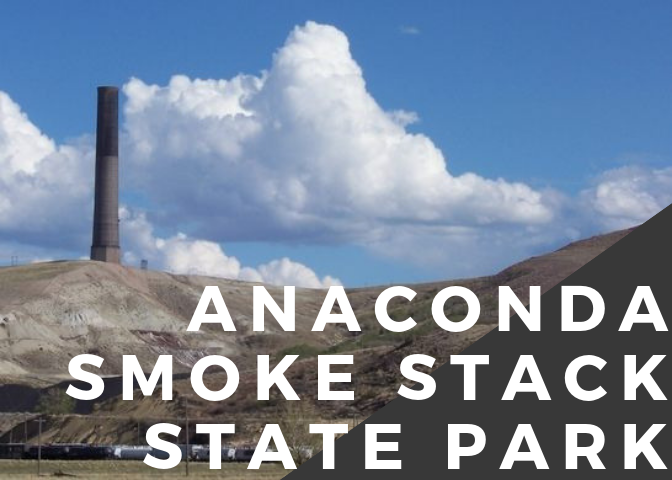 This week’s focus takes us to the old mining town of Anaconda, MT right off
I-90 24 miles from Butte, MT to the Anaconda Smoke Stack State Park.

Situated on top of a hillside of the Anaconda Pintler Mountain Range foothills, you can see this state park from miles around.

As a monument to the nation’s period of industrialism, particularly when viewed in conjunction with Butte’s Berkely Pit, it immortalizes the scale of the mining that once dominated and influenced this part of Montana.

Anaconda Smoke Stack State Park is an excellent place for day use.

With the first brick of the chimney set by smelter manager Frederick Laist on  May 24, 1918,  construction was completed on November 30, 1918.

The old Anaconda Copper Company smelter stack is 585 feet tall and clocks in as one of the tallest free-standing brick structures in the world. The inside of the stack is 75 feet wide at the bottom and 60 feet wide at the top.

Listed in the National Register of Historic Places, the smelter closed in 1980.  In 1983, the stack, the smelter, and the other buildings nearby were listed as a Superfund cleanup site.  Efforts to clean up contaminated soils, structures, and other mine debris began in the 1980s and are ongoing.  In order to protect the public and limit their liability, the Atlantic Richfield Company closed the area around the stack and public visitation is allowed only during officially organized tours or events.

Much like the smelter and other buildings that used to be located on Smelter Hill nearby, the smokestack was likely to be demolished as part of the Superfund cleanup efforts.  A group of longtime Anaconda residents formed the “Anacondans To Preserve The Stack” committee.  Their efforts led to the preservation of the big stack and they continue to work to find ways to preserve the stack and make it accessible to the public.  Today visitors can view and photograph the stack from a distance.

Interpretive signs describing the history of the stack are located in the viewing site near Goodman Park.

Montana Public Radio produced a great story about the Anaconda Smoke Stack for its 100th anniversary in August of 2018. You can listen to and read that story here.

In the fall of 2018, the smokestack celebrated its 100th-anniversary!