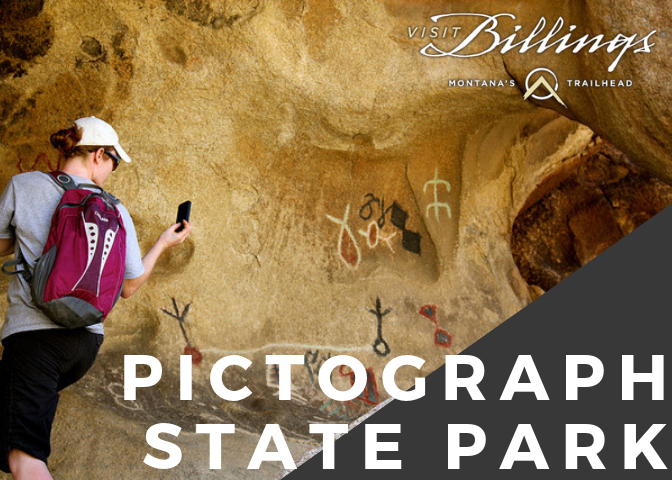 This week’s focus takes us just outside of Billings, MT to an area of three caves that are preserved and protected in the 23-acre Pictograph Cave State Park.

Along the rimrocks, you’ll find where Pictograph Cave has drawn human beings for over 3,000 years and was home to generations of prehistoric hunters. With its abundant wildlife and vegetation, the fertile river valley provided an ideal campsite for travelers.

Inside the three caves, you can find over 2,100-year-old pictographs from some of Montana’s first inhabitants. The when and the how they arrived is still a mystery and the pictographs they left behind are still subject to great debate.

This week’s State Parks park showcase is brought to you by Visit Billings.

Located only five miles from Billings, Pictograph Cave State Park may seem small at only 23 acres but is full to bursting with history.

Due to its archeological significance, Pictograph Cave State Park was designated as a National Historic Landmark in 1964.

Thousands of years ago, prehistoric hunters who camped in the Pictograph Cave left behind artifacts and over 100 pictographs.

The three main caves in the park – Pictograph, Middle, and Ghost – were created from the Eagle sandstone cliff by water and wind erosion. The deepest of the caves, Pictograph Cave, is 160 feet wide and 45 feet deep.

In 1936 the first artifacts and paintings were discovered in the caves. And the next year became one of the first archeologic excavations in Montana.

Roughly 30,000 artifacts were excavated from the site including, stone tools, weapons, paintings, and instruments. These artifacts helped researchers to understand which native people used the caves and when. In addition to tools and animal bones, the excavations also turned up jewelry, pendants, bracelets, and beads crafted of seashells acquired from Pacific Coast Indians, and in one excavation, discovered barbed harpoon points of the Eskimo culture, made of caribou horn.

You’ll find pictographs depicting animals, warriors, and even rifles! The different colors used in the pictographs allowed researchers to identify when people inhabited the region and gave an inside look into their lifestyle.

Although you won’t be able to camp in Pictograph Cave State Park you can:

✅ Transport yourself back in time by exploring the caves.

✅ Check out the Visitor Center and learn more about the history of the caves.

✅ Eat your picnic while gazing out at incredible views.

✅ Don’t forget to pick up a memento from the gift shop!

✅ See if you can spot any wildlife near the caves.

The best time to see the pictographs is after rain or snowmelt! The moisture causes the drawings to become more prominent. And you’ll give yourself about an hour to walk the trail with extra time for a picnic and bird watching.

DID YOU KNOW?
The oldest art found at Pictograph Cave State Park is over 2,000 years old and from some of the very first humans on the plains.

Today, the park has a quarter-mile loop trail that leads to the caves. Along the trail you can find interpretive displays that identify and explain the natural features, pictographs and vegetation found near the caves.

If you’re planning to visit, be sure to bring your binoculars to get the best view of the rock art, and be sure to check out the new Visitor’s Center which includes interpretive displays and a gift shop.

Despite its close proximity to Billings, Pictograph Cave State Park has an abundance of wildlife.