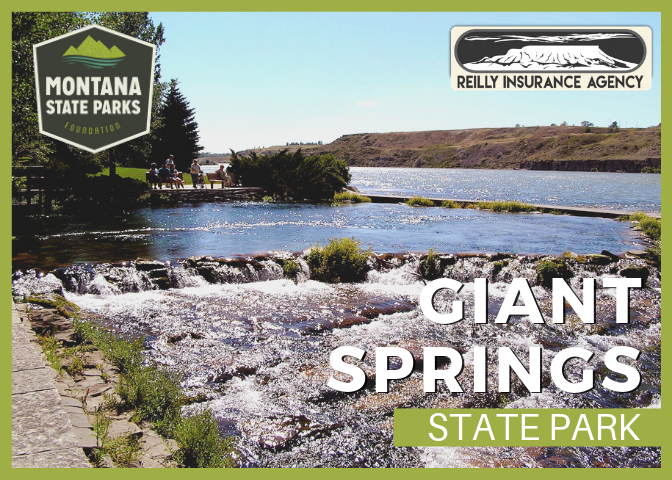 This week’s featured state park, Giant Springs, is brought to you by The Reilly Insurance Agency of Great Falls, MT!

Just outside of Great Falls lies Giant Springs State Park. Originally discovered by the Lewis & Clark Corps of Discovery Expedition in 1805, Giant Springs is one of the largest freshwater springs in the country.

Did you know?
The spring flows at a rate of 156 million gallons of water per day and is always 54 degrees Fahrenheit!

Multiple bridges cross the crystal clear water the makes up Giant Springs, allowing visitors to peer in and see the growing vegetation and even an occasional fish!

The Roe River (also found in Giant Springs State Park) was once listed in the Guinness Book for World Records as the world’s shortest river!

The water found in Giant Springs comes from the Madison Aquifer under the Little Belt Mountains. Because the water stays around 54 degrees year-round, Giant Springs State Park is great to visit regardless of the season! In the winter, the steam rises off of the unfrozen water and birds flock around the warm water, while in the summer, the park is, on average, 20 degrees cooler than the nearby city of Great Falls.

“Best park. Bring nickels for food for the very large trout at the Hatchery. Beautiful area with the shortest river in the world, and the largest freshwater spring!”

“Great place to spend the day. There is plenty of hiking and nice views. There are also good restrooms and a small interpretive center.”

“This park is so beautiful! The rivers are lovely, they have a nice path to walk/jog on and the fish pond is fun!”

“The springs are amazing (clearest water you have ever seen), and the fish hatchery is fun to look at. Overall, a great place to chill with friends. ”

“Beautiful and peaceful place to relax and walk. Loved watching the birds in the water rushing down from the falls.”