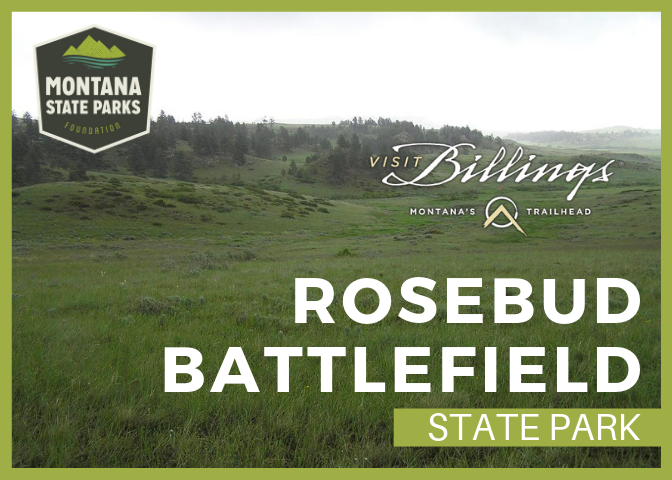 This week’s featured state park, Rosebud Battlefield, is brought to you by Visit Billings!

The location of the Battle of Rosebud, this state park is an incredible historical location that shouldn’t be missed!

Did you know?
Rosebud Battlefield is one of the most undeveloped, pristine battlefields in the nation.

While looking for the Sioux and Northern Cheyenne villages of Chief Sitting Bull, Brigadier General George Cook, along with 1000 troops and Crow and Shoshone scouts, were unprepared for an organized attack.

One of the largest battles of the Indian Wars, the Battle of Rosebud, or “Where the Girl Saved Her Brother” as referred to by the Northern Cheyenne, lasted for eight hours.

Because Crook’s troops had been withdrawn from the war zone in order to resupply, they were not there to support Colonel Custer at Little Bighorn. The defeat at Little Bighorn by the Lakota and Northern Cheyenne warriors was a shock to the nation and lead to a counterattack and the Lakota’s loss of the Black Hills.

Rosebud Battle State Park is a very significant historic park where visitors can retrace the steps of soldiers and warriors at the site of the largest battle in the history of Montana.

Although the park does not encompass the entirety of the battlefield, the 3,025-acre park has remained nearly the same as it was during the time of the battle in the 1870s.

The use of metal detectors, digging and the collecting or removal of artifacts is restricted and bikes are allowed on existing roadways only.

Be very cautious while in the park as rattlesnakes reside in the area!